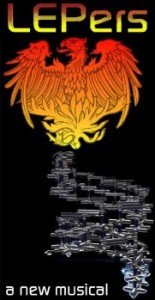 LEPers is a new dramatic musical, based on the unpublished play by Aaron Alon, with book by Terra Ziporyn, music by Aaron Alon, and lyrics by Julie Pedersen.

LEPers is a new dramatic musical. It takes place in the 23rd century, in a society that can extend human life indefinitely by downloading a person’s brain into a ready-made clone, if that person is deemed “useful” to society by a panel of magistrates. Those deemed old, ill, or otherwise “useless” are expelled to the colonies, where they are cut off from mainland society and live out the rest of their natural lives without access to medical care or other advanced technology. However, maintaining this way of life is costly, and the establishment, forced to devote the bulk of its waning resources to life extension procedures, is becoming increasingly threatened by an underground rebel group that has stored up arms and other vital resources.

The play opens in a clonehouse where DR. EMILY HARRISON, about to be considered for a 4th life extension procedure (L.E.P.), is considering the new powers she’ll have when her aging self is “downloaded” into a copy of her 20-year-old body (“So Many Clones”). What she doesn’t know, but soon comes to suspect, is that two of the three Magistrates set to determine her fate (CHARON and OVIS) are determined to have her request denied, and, at the same time, to use the trial to implicate a third Magistrate, CORY, whom they believe is disloyal and unfit for office and who also happens to be Emily’s ex-husband (“Unfit to Sit”). During the LEP trial, Emily argues that she should be granted a 4th L.E.P. to continue her esoteric scientific work. (“Another Life”)  Despite Cory’s efforts, she is denied the procedure and sent to the colonies. Emily departs for the colonies along with Cory’s distant relative HART THOMAS, a member of the subversive group, Life for All (the L.F.A.), and the father of PAUL, a teenager in trouble at school for questioning the system of banishing people from mainland society (“I Have to Know”). Paul’s teacher, FRANCINE LERNER, is ordered to send Paul to the Center for Maladjustment Correction. Concerned for Paul, Francine consults Cory, hoping that this powerful Magistrate might be able to rescue his young cousin, but, fighting for his professional life, the best Cory can do is direct her to Charon. Meanwhile, a representative of the Center for Population Control (C.P.C.) confronts Cory about his unprofessional conduct toward Emily in her trial. Realizing that Emily is still the love of his life, Cory writes Emily a letter asking her to appeal the magisterial decision and return to him. What he doesn’t know is that the mail between the mainland and colonies is censored, and that the C.P.C. is bribing Charon to deny life extensions to people whose clones were destroyed by the L.F.A. (though, to minimize the threat, they put the blame on Mr. M., a notorious mass murderer). In the last scene, Charon assures the C.P.C. representative that Cory won’t interfere in this process, because Cory has written a treasonous letter which Charon has confiscated from Cory’s desk. When Charon confronts Cory with this letter, Cory mistakenly concludes that Emily must have betrayed him.

This act opens with Francine catching Charon sneaking himself into the colonies. Charon is taking bribes from colonists who want to appeal their cases. He also tries unsuccessfully to blackmail Emily into paying him off, lest Cory be convicted of treason. Unbeknownst to Charon, Emily is working with Hart to spearhead a revolutionary effort to deliver mail to mainland rebels, asking them to empower the colonists with arms and other supplies. Charon returns to the mainland, in time to deny Mr. M’s request for an L.E.P. Cory discovers that this “morally right” decision was a sham; Charon is in collusion with the CPC to keep this murderer in business and to quell the influence of the rebels. Increasingly disillusioned, Cory is intrigued when Francine tells him about Charon’s trips to the colonies; he realizes that he can go there, too, and doing so, he confronts Emily directly. Emily, who thinks Cory has renounced the mainland society and given his life to be with her, reveals her love for him and explains that she did not betray him: his letter, like so many others, must have been confiscated before it ever got to her. The two soon realize, however, that they can never be together: Cory will not leave mainland society, and Emily wants no part of the corrupt life on the mainland and is finding unexpected fulfillment in her revolutionary efforts. Disheartened, Cory returns to the mainland, only to overhear, along the way, Paul being tortured at the Center for Maladjustment Correction. Though shocked and horrified by the injustice, he finds himself unable to intervene. Soon afterwards, Cory is tried for aiding and abetting an appeal (a treasonous offense), insubordination, and magisterial bias. The letter to Emily is the most damning evidence against him. Francine, meanwhile, discovers Paul dead on an apartment stoop, left there by the Center for Maladjustment Correction, but reported to have committed suicide. Ultimately, Cory is allowed to remain on the bench, but only due to a glitch in the collection of evidence as well as the revelation that his votes have never carried any real power. Devastated by the realization that his life’s work has meant essentially nothing, he is about to kill himself when Francine intervenes. She tells him that he owes it to Paul to come with her to the colonies and fight to overturn this society.  Cory escapes to the colonies with Francine, with plans to help the mounting revolution and hopefully to reconcile with Emily.

Terra Ziporyn is a playwright, fiction writer, and the award-winning author of numerous health and science books including The Harvard Guide to Women’s Health and Alternative Medicine for Dummies. Currently a member of the Theatre Building of Chicago’s Writers Workshop, she graduated from Yale University, where she studied playwriting with Ted Tally, and then completed a Ph.D. in the history of science at the University of Chicago. Terra has participated in both the Bread Loaf Writers Conference and the Old Chatham Writers Conference and has won numerous awards and fellowships for both fiction and science writing, including short story awards from Writer’s Digest Magazine and the Chicago Literary Review, a AAAS Mass Media Science Writing Fellowship, and an Artist Development Grant from the Vermont Council on the Arts.  Her plays include Wally’s Playhouse, authored with Jim Hughes and Will Graveman (produced and presented at Theatre Building Chicago) and The Teacup (produced at Yale University).

Aaron Alon has been involved in musical theatre since the age of 9, as a pianist, actor, singer, and composer.  He holds a BA in music from the University of Chicago and an MM in composition from the Cleveland Institute of Music.  He is currently pursuing a doctorate in composition at Rice University’s Shepherd School of Music, where he studies with Shih-Hui Chen.  Past composition teachers include Marta Ptasznska, Margaret Brouwer, Easley Blackwood, Jean Milew, and Orianna Webb.  He has also studied jazz arranging with Paul Ferguson and composition for musical theatre with The Writers’ Workshop (formerly known as New Tuners).  His award-winning classical music has been heard in new music concerts around the country.

Julie Pedersen obtained her Ph.D. in Philosophy from Purdue University in 1991. She has taught philosophy at Purdue and at Loyola University of Chicago.  She founded and served as President of the American Philosophical Association’s Central Division Sartre Circle.  Julie has over 50 published credits, including feature stories for the Chicago Tribune, magazine articles, essays and book reviews.  As a member of the New Tuners workshop in Chicago, she was the lyricist for the 10-minute tuner, Too Many Cooks (book by Marie Yuen, music by Jill Marshall Work); she also wrote the book and lyrics for the One-Act musical Twice Upon a Time (music by Ken Pedersen) and the book for Brave New Kitchen, all of which were produced by Theatre Building Chicago.  In addition to her work for musical theatre, Julie has co-written (with Jeanne Jordan) five screenplays which have won or placed in the top 5% of several national and internation screenplay competitions.  She is also the co-author (with Jeanne Jordan) of The Panic Diaries:  The Frightful, Sometimes Hilarious Truth About Panic Attacks, published by Ulysses Press in America and Hamlyn/Octopus Publishing Group in the United Kingdom (July, 2004).

PLAY HISTORY: LEPers has been a project in the making for a number of years.  Here’s a brief chronology of the project, up to the present day:

2000: Aaron Alon completes his straight play, LEPers, and secures copyright for it.
2003: Aaron pitches two ideas for musicals at a Chicago-based musical theatre workshop.
2003: Terra Ziporyn signs on as book writer for the musical version of LEPers.
2003: Terra Ziporyn completes a draft of the book for LEPers.
2003: Aaron and Terra begin a nationwide search for a lyricist, attracting applicants from all over the US.
2004: The lyricist search ends, and Julie Pedersen signs on as lyricist for LEPers.
2004: “Another Life” is test-run in performance at the Cleveland Institute of Music.

LEPers is being workshopped through The Writers’ Workshop at Theatre Building Chicago.