TO BE AN EAGLE! 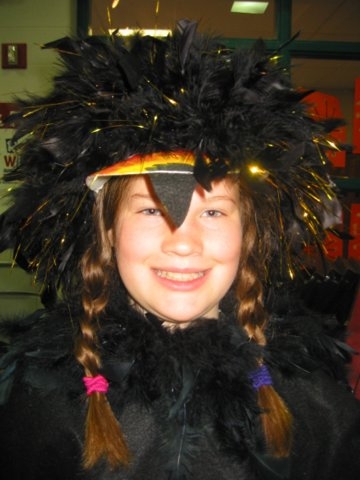 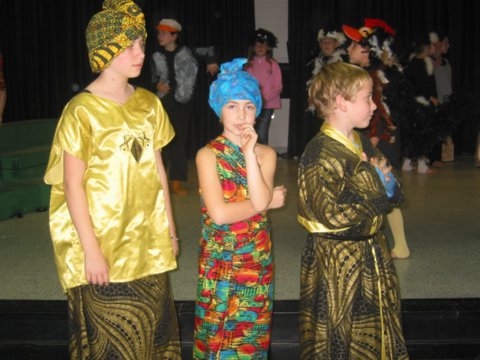 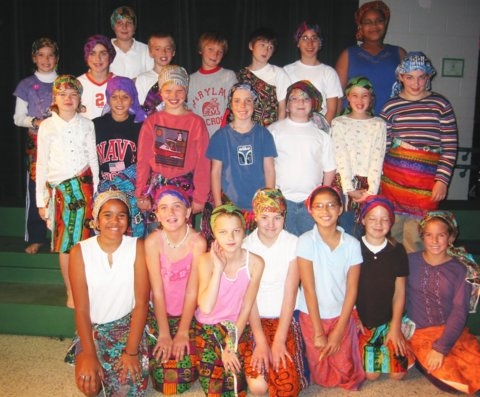 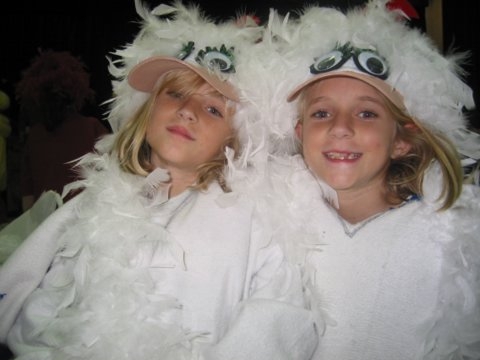 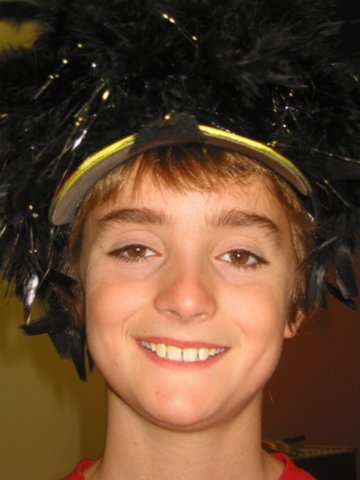 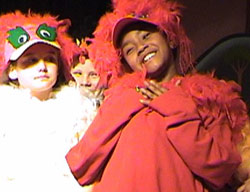 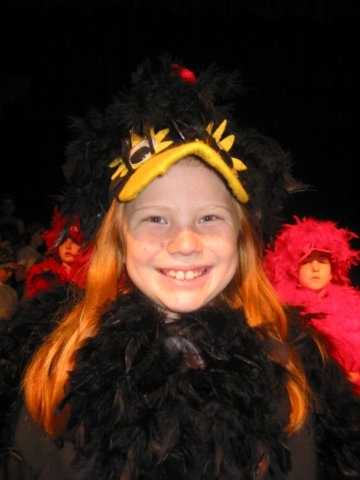 To Be An Eagle! is an original musical written specifically for a cast of elementary school performers by Juilliard-trained composer Lita Grier of Chicago, lyricist Jim Hughes of Albuquerque, and bookwriter Terra Ziporyn of Severna Park, MD. The musical, which can easily be adapted for a cast between 12 and 30-plus, is based on a traditional African folk tale about a baby eagle who, cut off from any knowledge of who he is, is raised as a chicken, failing miserably in his efforts to peck and preen. This version of the tale involves not one, but five, baby eagles, all different, but all equally confused about who they really are.

The play opens in an African village, where Great Mama Eagle is torn from her husband, Great Papa Eagle, and captured by poachers. Mama dies while in captivity but not before giving birth to five eagle eggs and leaving them her “talking” tama drum. The poachers pawn off these eggs to a chicken farm as “rare Congolese chickens,” where the eggs soon hatched are dubbed “baby chicks,” despite their surprising appearance and obvious gawkiness. One day Great Papa Eagle, who has been searching the continent for his lost family, appears in the chicken yard, and is captured as a “rare Congolese chicken”–in spite of the fact that he insists he is an eagle who knows how to fly. When Great Papa Eagle discovers one of the baby eagles playing his wife’s tama drum, however, he realizes that these so-called chicks must be his children. He teaches them not only how to play the drum like eagles but also how to lift up, fly and soar. Seeing the six birds in the air, the chickens realize at last that they have made a mistake. They’re awed by the eagles, but admit that being a chicken has its advantages, too–as long as you’re a chicken! Realizing that being true to their own nature is key to fulfilling their own destiny, the eagles and chickens celebrate together in dance. To Be An Eagle! can be performed in an hour and includes 14 original songs and musical numbers, all written in a range for elementary school voices. Highlights include African drumming, a chicken fashion show, and a barnyard hoedown. This play can easily be adapted for a cast between 12 and 30-plus by varying the number of villagers/poachers/chickens and/or by doubling parts. Small casts, for example, can eliminate some of the specific voices by doubling or tripling up on speaking parts (for example, having only 2-3 speaking villagers, hens, etc.), and even smaller groups may want the same children to play villagers and chickens. Larger groups can always add extra (non-speaking) animals as singers and dancers. Virtually all parts can be played by either boys or girls.

This show can be done with minimal (suggestive, with a few plants or papier mache rocks) or more elaborate sets (such as a wooden fence or a backdrop of a barnyard or chicken house), as desired. There are three separate settings: the African village, the poachers campsite, and the chicken yard.

Terra Ziporyn is a playwright, fiction writer, and the award-winning author of numerous health and science books including The Harvard Guide to Women’s Health and Alternative Medicine for Dummies. Currently a member of the Theatre Building of Chicago’s Writers Workshop, she graduated from Yale University, where she studied playwriting with Ted Tally, and then completed a Ph.D. in the history of science at the University of Chicago. Terra has participated in both the Bread Loaf Writers Conference and the Old Chatham Writers Conference and has won numerous awards and fellowships for both fiction and science writing, including short story awards from Writer’s Digest Magazine and the Chicago Literary Review, a AAAS Mass Media Science Writing Fellowship, and an Artist Development Grant from the Vermont Council on the Arts.  Her plays include Wally’s Playhouse, authored with Jim Hughes and Will Graveman (produced and presented at Theatre Building Chicago) and The Teacup (produced at Yale University).

A native New Yorker, Lita Grier is an award-winning, Juilliard-trained composer, who has returned to composition after an interlude of more than 30 years.  Her music is featured on several Cedille recordings, and includes Renascence for Flute and Orchestra with the Czech National Symphony, which has been described as “[a] new classic in the standard flute repertory,” “Songs from Spoon River,” commissioned by the Ravinia Festival for their Centennial celebration and performed in 2004. The Ravinia Festival recently commissioned Ms. Grier to compose a second song set, based on the same American classic “Spoon River Anthology,” for its 2006 season. Additionally, Ms. Grier is president of InterContinental Media Inc, presently airing a nationally distributed radio series with the Vienna Philharmonic Orchestra, hosted by Jeremy Irons. She has written five works for musical theater, all of which have been produced locally. Three of these have been in collaboration with Susan DiLallo, 2002 winner of the Richard Rogers Prize in musical theater and 2002 Ed Kleban Award, given to the “most promising librettist in American Musical Theatre.”

Playwright and lyricist Jim Hughes’ latest success was the Chicago premiere of his new musical FAITH (co-authored with composer Gerald Rizzer), which premiered at The Theatre Building, Chicago in February 2004 as part of the Monday Night Musicals – a concert reading series. Previous musicals include book & lyrics for FIRE! CODES?, …AND NOW MIGUEL, THE IRISH PRINCESS, CRAZY LADY, GOLD FEVER, as well as the lyrics for the musical NEVER AGAIN, co-authored with fellow workshop members Terra Ziporyn (book) and Will Graveman (composer). Mr. Hughes is a long-time member of the Musical Theatre Writers’ Workshop.

To Be An Eagle! was developed at the Theatre Building Chicago’s Musical Theatre Workshop, a group devoted to creating new musical theatre and which has nurtured works that have gone on to presentation in Chicago, New York, Boston, Los Angeles, San Diego, and Seattle, as well as international arenas.  It had its premier production in November 2004 at Jones Elementary School outside of Annapolis, MD and is currently in rehearsal at two Chicago public schools.